Hi!
We’ve been running RT for over a decade as our primary ticketing system and I stood up a small, separate RTIR system a couple of years ago. Both are RT 4.4.4. I’m now looking at moving to 5.x for both and I’m running into a puzzling problem specific to the “RTIR at a glance” interface.

Navigating the same tickets in the RT interface does not create this behavior. Here are a couple screen shots to show what I’m talking about:

Open the incident ticket, then go back to the RTIR at a glance, and it’s this: 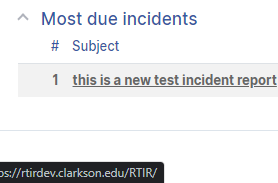 This happens both in CentOS7 and Ubuntu 20.04. Both are running Apache but different versions of perl (5.16.3 and 5.30.0 respectively) and used CPAN to load dependencies (make fixdeps)

No errors generated in the rt or apache logs even with both set to debug.

This issue should be fixed in the new beta releases posted today, if you want to test. You can also get a patch to try from the public bug ticket for this issue.