This is a slightly esoteric question about something which I’ve “fixed” locally but I thought I’d ask if anyone else has experienced, in case it is a real bug affecting other sites.

In RT5.0.0 when displaying approvals (/Approvals/Display.html) do other people see the “Queue” header in “The Basics” section of the " Tickets which depend on this approval" pane rendered incorrectly? For us the bounding box is sized wrong so it looks like the word “Queue” is rendered vertically. Here’s what it looks like: 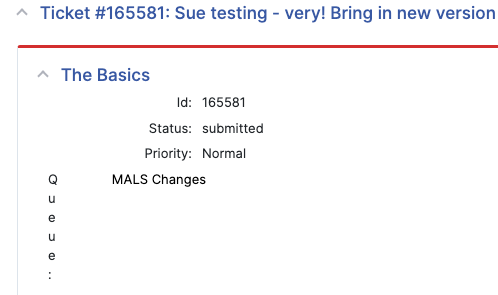 I’ve tracked this down to the Approvals/Elements/ShowDependency file, which seems to be putting <a name="ticketIdNumber"> in all over the place as it is called recursively. Making a local copy of that file and removing that name anchor fixes the display for us. Having it in there seems to screw up the CSS class inheritance, which is what causes the rendering problem (not to mention having repeats for the same named HTML anchor). There don’t appear to be any href anchors pointing to this name either.

As we have lots of customisations on our RT instances, including approvals flows, I don’t know if this is something we’ve brought upon ourselves (in which case fine, we’ll use this “fix”) or if its affecting other sites (in which I’ll submit a bug report/patch).

So if you use approvals in RT5.0.0 can you let me know if you see this rendering issue please?

I can see this issue as well

Great - thanks for letting me know. I’ll file a bug report and patch in that case.

In case anyone wants to follow along at home I’ve filed the bug report and patch: https://rt.bestpractical.com/Ticket/Display.html?id=37013